The Missus and I grabbed a quick bite to eat at Pancheros (SouthPointe) last night. I expected something ... different. I didn't get it. 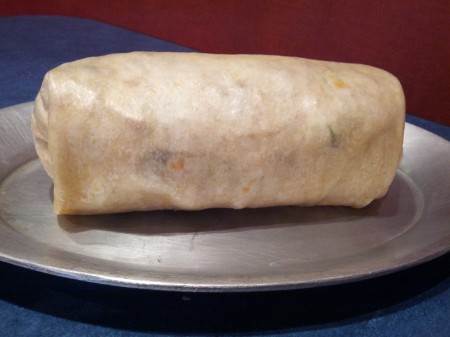 Everything about Pancheros was fine. The food was fine. The atmosphere was fine. The service was fine. But Lincoln is crawling with burrito joints and Mexican food. Is "fine" good enough? I don't think so. Consider my first impressions. When I walked in the door I immediately got the sense that Chipotle and Qdoba had had a child, and their spawn, although adequate in its own right, didn't inherit any of the components that make its parents special. There's no emphasis on high-quality ingredients; no outgoing staff; no immediately-recognizable decor; no extensive and creative menu. At first glance it was little more than Just Another Burrito Joint. The menu hanging over the front counter is a good example. It couldn't possibly be more generic. Pick one: burrito; quesedilla; bowl; salad. Pick one: veggies; chicken; pig; cow. I actually yawned while placing my order.

Pancheros does bring a couple unique components to the table. First, they press your tortilla right when you order. Down in Albuquerque where my in-laws live, all the good joints make their own tortillas on location. It's about time somebody brought that to Lincoln. Pancheros also stirs your burrito's ingredients using a tool they call "Bob". (I guess that does sound better than "el putty knife".) The marketing is dorky but the effect on the burrito is nice. And as for the taste? As I said before, it was fine. Good even. But it didn't knock my socks off. How could it? I've eaten so many burritos it's pretty tough for a burrito to wow me. And that's Pancheros's biggest hurdle. They're so late to the game and they have so little to differentiate themselves that they're just not going to cause a stir. It's the sort of place you go to because it's nearby, not because you sought it out. Considering how much they're likely paying in rent, that's not good for them. On the plus side I can't really think of anything bad about Pancheros. If you find yourself eating there you will, in all likelihood, satisfy your taste buds and your hunger. But will you specifically seek out Pancheros for supper tonight? Probably not.
Derek J. Augustine
October 11, 2012 at 2:08PM

Tried it in Omaha before it was in Lincoln. I agree, total yawn fest.

Also, if you ask, Chipotle & Qdoba will stir your ingredients. 😊

Qdoba is horrible though. Blech. And I’m super dependent on the tortilla. Who else makes tortillas in house? Maybe de Leons? I want to try it just for that. But I live far away, so probably not going to happen anytime soon.

We’re pretty regular Chipotle customers. I liked it when they first came to town and no one was doing the same burrito thing. Now, we eat there more often that I would like to just because the kids enjoy it.

Our family of 4 went to Panchero’s shortly after it opened (the weekend of the review in the LJS) and it was dead at dinnertime on a Saturday. Not a good sign. My food was okay, but I prefer Chipotle.

To my kids, the food wasn’t anywhere near Chipotle. So I doubt all four of us will be back.

Speaking of the tortilla - a couple years ago, I quit getting a burrito and started doing a burrito bowl. That saves me about 550 calories each time I eat there. Chipotle’s website has a super calorie calculator where you can figure out the nutrition of what you are eating the exact way you order it. Pretty cool.

Have you guys tried Fuzzy’s yet? I came away pretty impressed by the menu and especially the way that place is set up. It’s an ‘L’ with the restaurant seating area on the south side and a cool little bar on the east side.

Qdoba seems to really divide people. I happen to think it’s ok and those I’ve eaten there with have liked it as well. But plenty of others are like you in hating it.

> But I live far away, so probably not going to happen anytime soon.

I wouldn’t wait too long. Who knows how long it’ll last 😊

I haven’t made it there yet. I know Mr. T has and he says it’s awesome. I’m sure he’ll be around soon to sing its praises.

I tried it. I liked it better than Wahoo’s. But I was pretty upset that, when I ordered the tempura shrimp taco, it came not tempura-fried but panko-breaded.

And then I went to Tokyo’s on 27th street and ordered a tempura shrimp appetizer AND THAT TOO came panko-breaded, not tempura-d. What’s the world coming to, not knowing the difference between tempura and panko?!?

Mostly it’s the tortilla for me. My grandmother used to make the best tortillas on earth. And now if you don’t have a good tortilla, I won’t be able to tolerate the burrito or taco or whatever. You know?

Obvious follow-up question: what’s the difference between tempura and panko?

Makes sense to me. My childhood tortilla experiences typically involved Old El Paso and Taco Inn. These days I enjoy a good tortilla but it hasn’t made it to “required” status just yet.

Well, tempura is a batter and it’s very light and crispy until it cools: then it’s soggy. Panko is a breading; it too can be light and crisp but it’s usually more crunchy.

If you go to Tokyo’s have the tempura vegetables and tempura shrimp. When I went on Sunday the shrimp was panko breaded and the vegetables were tempura battered. It was upsetting, though it was still good shrimp, just felt bait and switched.

Yes! I loved Fuzzy’s when I was there last weekend (had the tempura shrimp, grilled fish, and fried fish tacos). The feta cheese and garlic sauce on the tacos added a cool fusion touch that was unique and really, really worked well in my opinion.

I also liked the experience at Fuzzy’s. It wasn’t a complete game changer in terms of environment or service, but I found the vibe to be eccentric yet polished.

That soda machine they had was pretty cool. It was a self-service touch screen machine and seemed to offer a LOT of different soda flavors, like dozens. I’d never seen anything like that before. I’m not a soda drinker usually, but next time I go there I have to give that a shot.

You must have had a different experience at Fuzzy’s. Both times we’ve been to Fuzzy’s it’s been a huge miss. Messed up our orders both times, waited forever for our food, have a huge window where you can watch the cooks fumbling over your order, and the food was meh. Many guys at work swore to never go back there again (one guy waited 30 minutes for 4 tacos). I thought it was alright, and their fried fish taco is the best thing on their menu. I’d rather have fish anything from OSO though, and then Wahoo’s.

Derek, I was there on a Saturday non-game day afternoon, so yes it was probably a very different service experience from yours.