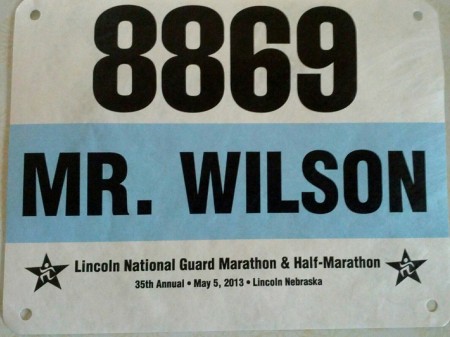 Some of you may get tired of hearing it, but thank you to everybody who participated in one way or another in yesterday's Lincoln Marathon and Half-Marathon. That goes for runners, walkers, the lone wheelchair guy, volunteers, cops, National Guard members, and spectators. The Lincoln Marathon is a truly wonderful event for our community and, traffic-snarling effects aside, we should all be extremely grateful for its growth and success. I finished the half-marathon yesterday in a PR of 1:45 on the nose. That happened to be my exact goal for the day. Talk about precise training! Well ... that gives my training regimen far too much credit. I got lucky. The day went both better and worse than it could have. The two sides apparently cancelled each other out. On the "better" side was the weather. You're not going to find much more perfect distance running weather than what we had yesterday. Cool, cloudy, and just a light breeze. That was PR weather if I ever saw it. Spectators apparently didn't think so, though. It seemed like there weren't nearly as many folks lining the course as there were last year. I'm probably exaggerating, but I'd almost put the numbers at 50% fewer. 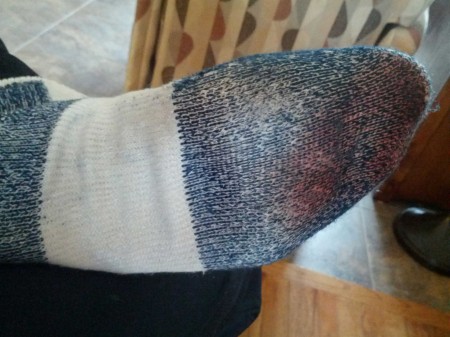 As for the "worse", my feet weren't in the mood to endure 13.1 miles of pavement. I could feel them giving out around 15K. By the time we turned onto 10th Street I was in a world of hurt. I walked from about 10th & Lake to South Street. Once I started running again I thought for sure I was going to have to walk at least one more time. Fortunately a young man by the name of Lucas Arredondo -- or as a spectator called him, "The Barefoot Bandit" -- came to the rescue. As he passed me around D Street I struck up a conversation, admiring his ability to run barefoot. We chatted off and on until he split off to continue the full marathon. Without that conversation I probably would have finished in the 1:50 range. Thanks, Lucas! I'm not sure how many of you readers ran yesterday, but please do let us know how it went. I know Fletch ran the half and finished near the top end of his expectations. Good work, Fletch! And I know that Nikkidemas hosts a marathon watch party every year at her house on Normal Boulevard. Thanks for supporting the runners, Nikki!
Nikkidemas
May 6, 2013 at 2:22PM

I saw one truly barefoot runner doing the full, and one in socks.  We had a blast yesterday!

I was all set to head over to your place, and then I realized a HUGE flaw in my plans: I rode to the race with my sister and it was close to 11am by the time she was ready to leave the stadium. I think next year I may ride my bike to the stadium 😊

b) Kudos on the PR. Can’t believe you had to walk and still rocked a 1:45. I’d like to think P90X and Shakeology have been a positive impact on your health, training and well-being.

c) I thought from the outset that the crowds were much smaller than I remembered the past two years. They are still amazing. So many great sings. The guy on Sheridan in his pickup with his drumset. I love how the folks on Sheridan, 20th Street, and Harrison Streets really seem to embrace this race.

I saw what had to be spectators offering Kleenex, jelly beans in cups, 2 kids holding open Skittles and M&M;‘s bags for runners to grab, orange slices (peeled!) and more.

Dude on 20th Street was trying to sweep up any spilled jelly beans on the hill without getting in the way of runners.

I high-fived so many kids, it was awesome. And then a lot of moms and dads would do so as well. I just can’t say enough good things about this race.

I now need to heal my heel and figure out how to channel my inner Mr. Wilson so I can work on getting my own PR one of these years. Congrats on your race! And many, many thanks to everyone else - LPD, National Guard, LFR, Lincoln Track Club, an army of volunteers, and all the spectators who came out!!!

* so many great “things” that is. My brain is still not functioning well.

Run home? Hell, I barely made it to the car yesterday. My feet were in baaaaad shape.

a) Can you believe I didn’t hear a single Dennis The Menace reference? I did get lots of “Go Mr. Wilson!“s though, so that was cool.

b) Thanks! I *definitely* owe a lot to Shakeology. I’ve barely had so much as a sniffle since starting on that stuff. I am a healthier guy because of it.

c) The dude with the broom on 20th Street was awesome. It was sort of a Sisyphean effort, but he sure was working his buns off.

d) The kids are so much fun. I tried to hit every high five I could but I know I missed a couple.

e) The biggest thing in my training that helped me was improving my interval work. I added some mile and half-mile intervals at well above race pace to my routine. I felt like my performance really surged about 10 days after I first started that.

Well done on the race.  I thought the number of spectators was about the same this year, but I was too focused on not falling over dead.

Sorry to see your mangled feet.  I am certain you probably know this, but blisters are usually preventable. My first reaction was that your socks appear to be pretty thick - which might allow for movement in your shoes. FWIW, I feel ridiculous whenever I shell out nearly $20 for a pair of socks (Smartwool are my preference), but my feet have been mostly problem free.

I’ll spare the gory details, but I just have really weird feet. Thick socks, thin socks, one sock, two socks ... it doesn’t really matter. Sooner or later my feet will be shredded. I was pretty surprised by how bad they got on Sunday, though. They hadn’t looked that bad after any of my training runs this spring, including some pretty intense efforts. Oh well, after all these years I’m used to it.

I figured there was more to the story. That is too bad you have not been able to mitigate the problem.  Maybe you should take up barefoot running and build up a nice callus on the bottom of your feet….

I second what Mike says about Smart Wool socks. I use their PhD model, and it’s the only sock I will wear for anything over 5 miles. Anything over 10 miles, I also dab a little Body Glide on my heels and the ball of each foot or wherever a blister or callous has been known to show up.

<i>Smart Wool socks. I use their PhD model, and it